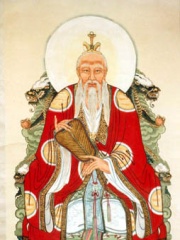 Laozi (, Chinese: 老子), also known by numerous other names, was a semilegendary ancient Chinese Taoist philosopher. Laozi is a Chinese honorific, generally translated as "the Old Master". Traditional accounts say he was born as Li Er in the state of Chu in the 6th century BC during China's Spring and Autumn Period, served as the royal archivist for the Zhou court at Wangcheng (modern Luoyang), met and impressed Confucius on one occasion, and composed the Tao Te Ching before retiring into the western wilderness. Read more on Wikipedia

Since 2007, the English Wikipedia page of Laozi has received more than 4,318,302 page views. His biography is available in 141 different languages on Wikipedia (up from 137 in 2019). Laozi is the 36th most popular philosopher (down from 32nd in 2019), the 5th most popular biography from China and the 2nd most popular Chinese Philosopher.

Laozi is most famous for being the founder of Daoism.

Page views of Laozis by language

Among philosophers, Laozi ranks 36 out of 1,081. Before him are Parmenides, Baruch Spinoza, Martin Heidegger, Anaximander, Al-Ghazali, and Diogenes. After him are David Hume, Søren Kierkegaard, Protagoras, Thomas More, Maria Montessori, and Sun Tzu.