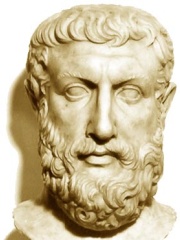 Parmenides of Elea (; Greek: Παρμενίδης ὁ Ἐλεάτης; fl. late sixth or early fifth century BC) was a pre-Socratic Greek philosopher from Elea in Magna Graecia. Parmenides was born in the Greek colony of Elea, from a wealthy and illustrious family. His dates are uncertain; according to doxographer Diogenes Laërtius, he flourished just before 500 BC, which would put his year of birth near 540 BC, but in the dialogue Parmenides Plato has him visiting Athens at the age of 65, when Socrates was a young man, c. Read more on Wikipedia

Parmenides is most famous for his poem, "On Nature," in which he argues that the world of our experience is an illusion and that the only thing that truly exists is a changeless, eternal, and perfect sphere.

Page views of Parmenides by language

Among philosophers, Parmenides ranks 30 out of 1,081. Before him are Seneca the Younger, Erasmus, Auguste Comte, Friedrich Engels, Averroes, and Heraclitus. After him are Baruch Spinoza, Martin Heidegger, Anaximander, Al-Ghazali, Diogenes, and Laozi.