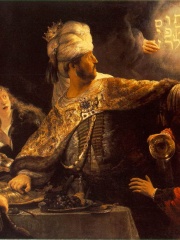 Belshazzar (Babylonian cuneiform: Bēl-šar-uṣur, meaning "Bel, protect the king"; Hebrew: בֵּלְשַׁאצַּר‎‎ Bēlšaʾṣṣar) was the son and crown prince of Nabonidus (r. 556–539 BC), the last king of the Neo-Babylonian Empire. Through his mother he might have been a grandson of Nebuchadnezzar II (r. Read more on Wikipedia

Belshazzar is most famous for the story of the writing on the wall, which is told in the Bible's book of Daniel. In this story, a Babylonian king named Belshazzar throws a feast and drinks from the cups of gold and silver that his father had taken from the temple in Jerusalem. He then sees a hand writing on the wall, and is so terrified that he falls down dead.

Page views of Belshazzars by language

Among religious figures, Belshazzar ranks 255 out of 2,272. Before him are Pope Celestine I, Photios I of Constantinople, Muslim ibn al-Hajjaj, Charles Borromeo, Pope Liberius, and Vincent de Paul. After him are Pope Adeodatus I, Sabbatai Zevi, Pope Anicetus, Judas Maccabeus, Saint Cecilia, and Pope Damasus I.