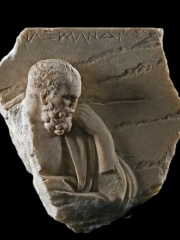 Anaximander (; Greek: Ἀναξίμανδρος Anaximandros; c. 610 – c. 546 BC) was a pre-Socratic Greek philosopher who lived in Miletus, a city of Ionia (in modern-day Turkey). He belonged to the Milesian school and learned the teachings of his master Thales. He succeeded Thales and became the second master of that school where he counted Anaximenes and, arguably, Pythagoras amongst his pupils.Little of his life and work is known today. Read more on Wikipedia

Anaximander is most famous for being the first person to propose that the earth was round.

Page views of Anaximanders by language

Among philosophers, Anaximander ranks 58 out of 1,089. Before him are Zeno of Elea, John Amos Comenius, Mikhail Bakunin, Lucretius, Empedocles, and Pliny the Elder. After him are Peter Abelard, Johann Gottlieb Fichte, George Berkeley, Ludwig Feuerbach, Rudolf Steiner, and Arius.