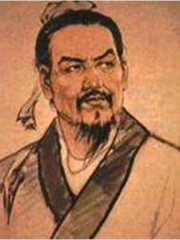 Han Fei (; traditional Chinese: 韓非; simplified Chinese: 韩非; pinyin: Hán Fēi; c. 280 – 233 BC), also known as Han Fei Zi, was a Chinese philosopher or statesman of the "Legalist" (Fajia) school during the Warring States period, and a prince of the state of Han.Han Fei is often considered to be the greatest representative of "Chinese Legalism" for his eponymous work the Han Feizi, synthesizing the methods of his predecessors. Han Fei's ideas are sometimes compared with those of Niccolò Machiavelli, author of The Prince. It is said that Shu Han's chancellor Zhuge Liang demanded emperor Liu Shan read Han Feizi to learn about governance.Sima Qian recounts that Qin Shi Huang even went to war with the neighboring state of Han to obtain an audience with Han Fei, but was ultimately convinced to imprison him, whereupon he commits suicide. Read more on Wikipedia

Han Fei is most famous for his philosophy of Legalism, which advocates strict adherence to the law and harsh punishment for those who disobey.

Others Deceased in 232 BC