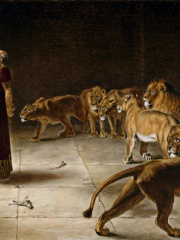 Daniel (Aramaic and Hebrew: דָּנִיֵּאל, romanized: Dānīyyēʾl, lit. 'God is my Judge'; Greek: Δανιήλ, romanized: Daniḗl; Arabic: دانيال, romanized: Dāniyāl) is the main character of the Book of Daniel. According to the Hebrew Bible, Daniel was a noble Jewish youth of Jerusalem taken into captivity by Nebuchadnezzar II of Babylon, serving the king and his successors with loyalty and ability until the time of the Persian conqueror Cyrus, all the while remaining true to the God of Israel. The consensus of most modern scholars is that Daniel is not a historical figure and that the book is a cryptic allusion to the reign of the 2nd century BCE Hellenistic king Antiochus IV Epiphanes.Six cities claim the Tomb of Daniel, the most famous being that in Susa, in southern Iran, at a site known as Shush-e Daniyal. Read more on Wikipedia

Daniel is most famous for his interpretation of the book of Daniel.

Page views of Daniels by language

Among religious figures, Daniel ranks 70 out of 2,272. Before him are Saint Barbara, Abu Hanifa, Pope Gregory XIII, Pope Gregory VII, Anthony the Great, and Luke the Evangelist. After him are Huldrych Zwingli, John Chrysostom, Maimonides, Pope Leo XIII, Martin of Tours, and Pope Paul VI.