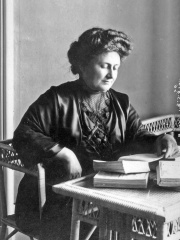 Maria Tecla Artemisia Montessori ( MON-tiss-OR-ee, Italian: [maˈriːa montesˈsɔːri]; August 31, 1870 – May 6, 1952) was an Italian physician and educator best known for the philosophy of education that bears her name, and her writing on scientific pedagogy. At an early age, Montessori enrolled in classes at an all-boys technical school, with hopes of becoming an engineer. She soon had a change of heart and began medical school at the Sapienza University of Rome, becoming one of the first women to attend medical school in Italy; she graduated with honors in 1896. Read more on Wikipedia

Maria Montessori is most famous for her philosophy of education. She believed that children should be allowed to develop at their own pace and have a natural curiosity about the world around them.

Among philosophers, Maria Montessori ranks 41 out of 1,081. Before her are Diogenes, Laozi, David Hume, Søren Kierkegaard, Protagoras, and Thomas More. After her are Sun Tzu, Plutarch, Michel de Montaigne, Origen, Al-Farabi, and Ludwig Wittgenstein.