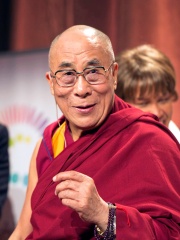 The 14th Dalai Lama (spiritual name Jetsun Jamphel Ngawang Lobsang Yeshe Tenzin Gyatso, known as Tenzin Gyatso; né Lhamo Thondup), known as Gyalwa Rinpoche to the Tibetan people, is the current Dalai Lama, the highest spiritual leader of Tibet, and a retired political leader of the nation. Born on 6 July 1935, or in the Tibetan calendar, in the Wood-Pig Year, 5th month, 5th day, he is considered a living Bodhisattva; specifically, an emanation of Guanyin (Avalokiteśvara Bodhisattva) . He is also the leader of the Gelug school, the newest school of Tibetan Buddhism, formally headed by the Ganden Tripa. Read more on Wikipedia

The 14th Dalai Lama is most famous for being the spiritual and political leader of Tibet.

Among religious figures, 14th Dalai Lama ranks 34 out of 2,272. Before him are James, son of Zebedee, Jonah, Matthew the Apostle, Pope John Paul I, John the Apostle, and Pope Pius XII. After him are Isaac, Saul, Ignatius of Loyola, Anthony of Padua, Pope Gregory I, and Joshua.

Among RELIGIOUS FIGURES In China