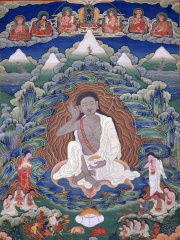 Jetsun Milarepa (Tibetan: རྗེ་བཙུན་མི་ལ་རས་པ, Wylie: rje btsun mi la ras pa, 1028/40–1111/23) was a Tibetan siddha, who was famously known as a murderer when he was a young man, before turning to Buddhism and becoming a highly accomplished Buddhist disciple. He is generally considered one of Tibet's most famous yogis and spiritual poets, whose teachings are known among several schools of Tibetan Buddhism. He was a student of Marpa Lotsawa, and a major figure in the history of the Kagyu school of Tibetan Buddhism. Read more on Wikipedia

Milarepa is most famous for being a Tibetan Buddhist saint and yogi who was born into a poor farming family. He was a student of Marpa the Translator, who was his guru. Milarepa studied under Marpa for many years and mastered the teachings and practices of Tibetan Buddhism.

Page views of Milarepas by language

Among people born in 1052, Milarepa ranks 2. Before him is Philip I of France. After him are Conrad II, Duke of Bavaria, Jón Ögmundsson, and Oleg I of Chernigov. Among people deceased in 1135, Milarepa ranks 2. Before him is Henry I of England. After him are Emperor Huizong of Song, Emperor Taizong of Jin, Al-Mustarshid, and Elvira of Castile, Queen of Sicily.