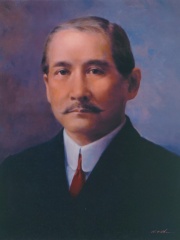 Sun Yat-sen (; born Sun Wen; 12 November 1866 – 12 March 1925) was a Chinese philosopher, physician, and politician, who served as the provisional first president of the Republic of China and the first leader of the Kuomintang (Nationalist Party of China). He is referred as the "Father of the Nation" in the Republic of China for his instrumental role in the overthrow of the Qing dynasty during the Xinhai Revolution. Sun is unique among 20th-century Chinese leaders for being widely revered in both mainland China and Taiwan.Sun is considered to be one of the greatest leaders of modern China, but his political life was one of constant struggle and frequent exile. Read more on Wikipedia

Since 2007, the English Wikipedia page of Sun Yat-sen has received more than 3,371,235 page views. His biography is available in 113 different languages on Wikipedia making him the 156th most popular politician.

Among politicians, Sun Yat-sen ranks 154 out of 14,801. Before him are Joseph Goebbels, Darius III, Reinhard Heydrich, Louis IX of France, Francis I of France, and Frederick II, Holy Roman Emperor. After him are Caracalla, Hulagu Khan, Dwight D. Eisenhower, Richard Nixon, Oliver Cromwell, and Maximilien Robespierre.