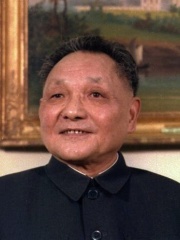 Deng Xiaoping (22 August 1904 – 19 February 1997), also known by his courtesy name Xixian (希贤), was a Chinese revolutionary and statesman who served as the paramount leader of the People's Republic of China (PRC) from December 1978 to November 1989. After Mao Zedong's death in 1976, Deng gradually rose to supreme power and led China through a series of far-reaching market-economy reforms earning him the reputation as the "Architect of Modern China". This led to China becoming the world’s largest economy in terms of its purchasing power in 2014.Born in the province of Sichuan in the Qing dynasty, Deng studied and worked in France in the 1920s, where he became a follower of Marxism–Leninism and joined the Chinese Communist Party (CCP) in 1924. Read more on Wikipedia

Deng Xiaoping is most famous for implementing the "open door" policy, which allowed China to trade with the rest of the world.

Among politicians, Deng Xiaoping ranks 136 out of 15,710. Before him are Hermann Göring, Amenhotep III, Ferdinand I, Holy Roman Emperor, Mehmed III, Skanderbeg, and Maximilian I, Holy Roman Emperor. After him are Sun Yat-sen, Simón Bolívar, Richard Nixon, Bayezid I, Kublai Khan, and Darius III.