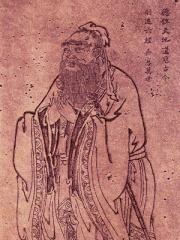 Confucius ( kən-FEW-shəs; Chinese: 孔夫子; pinyin: Kǒng Fūzǐ, "Master Kǒng"; or commonly 孔子; Kǒngzǐ; c. 551 – c. 479 BCE) was a Chinese philosopher and politician of the Spring and Autumn period who is traditionally considered the paragon of Chinese sages. Confucius's teachings and philosophy underpin East Asian culture and society, remaining influential across China and East Asia to this day.Confucius considered himself a transmitter for the values of earlier periods which he claimed had been abandoned in his time. His philosophical teachings, called Confucianism, emphasized personal and governmental morality, correctness of social relationships, justice, kindness, and sincerity. Read more on Wikipedia

Confucius was a philosopher who lived in China from 551 BC to 479 BC. He is most famous for his teachings on morality, ethics, and social order.

Page views of Confuciuses by language

Among philosophers, Confucius ranks 4 out of 1,081. Before him are Aristotle, Plato, and Socrates. After him are Pythagoras, René Descartes, Gautama Buddha, Immanuel Kant, Jean-Jacques Rousseau, Avicenna, John Locke, and Niccolò Machiavelli.

Others Deceased in 479 BC