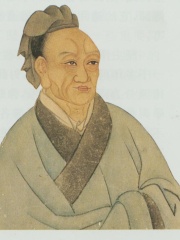 Sima Qian ([sɨ́mà tɕʰjɛ́n]; traditional Chinese: 司馬遷; simplified Chinese: 司马迁; pinyin: Sīmǎ Qiān; c.  145 – c.  86 BC) was a Chinese historian of the early Han dynasty (206 BC – AD 220). He is considered the father of Chinese historiography for his Records of the Grand Historian, a general history of China in the Jizhuanti style (traditional Chinese: 紀傳體; simplified Chinese: 纪传体; pinyin: jì zhuàn tǐ) covering more than two thousand years beginning from the rise of the legendary Yellow Emperor and the formation of the first Chinese polity to the reigning sovereign of Sima Qian's time, Emperor Wu of Han. As the first universal history of the world as it was known to the ancient Chinese, the Records of the Grand Historian served as a model for official history-writing for subsequent Chinese dynasties and the Chinese cultural sphere (Korea, Vietnam, Japan) up until the 20th century.Sima Qian's father Sima Tan (司馬談) first conceived of the ambitious project of writing a complete history of China, but had completed only some preparatory sketches at the time of his death. Read more on Wikipedia

Sima Qian is most famous for the Records of the Grand Historian, which is a history of China and the world from the time of the Yellow Emperor to the time of Emperor Wu of Han.

Among historians, Sima Qian ranks 4 out of 341. Before him are Herodotus, Ibn Khaldun, and Thucydides. After him are Tacitus, Livy, Xenophon, Josephus, Polybius, Suetonius, Alexis de Tocqueville, and Diodorus Siculus.

Others Deceased in 86 BC

Among HISTORIANS In China