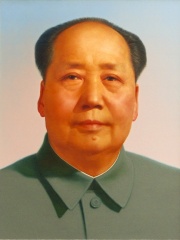 Mao Zedong (December 26, 1893 – September 9, 1976), also known as Chairman Mao, was a Chinese communist revolutionary who was the founding father of the People's Republic of China (PRC), which he ruled as the chairman of the Chinese Communist Party from the establishment of the PRC in 1949 until his death in 1976. Ideologically a Marxist–Leninist, his theories, military strategies, and political policies are collectively known as Maoism. Mao was the son of a prosperous peasant in Shaoshan, Hunan. Read more on Wikipedia

Among politicians, Mao Zedong ranks 22 out of 15,710. Before him are Attila, Suleiman the Magnificent, Hannibal, Benito Mussolini, Winston Churchill, and Otto von Bismarck. After him are Tutankhamun, Ulysses S. Grant, Cicero, Commodus, Umar, and Abraham Lincoln.