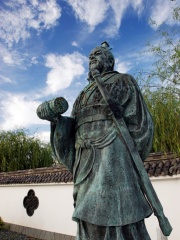 Sun Tzu ( soon DZOO, soon SOO; simplified Chinese: 孙子; traditional Chinese: 孫子; pinyin: Sūnzǐ) was a Chinese military general, strategist, philosopher, and writer who lived during the Eastern Zhou period. Sun Tzu is traditionally credited as the author of The Art of War, an influential work of military strategy that has affected both Western and East Asian philosophy and military thinking. It focuses much more on alternatives to battle and even to war than on war itself, such as stratagem, delay, the use of spies, the making and keeping of alliances, the uses of deceit, and a willingness to submit, at least temporarily, to more powerful foes. Read more on Wikipedia

Since 2007, the English Wikipedia page of Sun Tzu has received more than 4,200,736 page views. Her biography is available in 105 different languages on Wikipedia. Sun Tzu is the 42nd most popular philosopher (down from 36th in 2019), the 6th most popular biography from China and the 3rd most popular Philosopher.

Among philosophers, Sun Tzu ranks 42 out of 1,081. Before her are Laozi, David Hume, Søren Kierkegaard, Protagoras, Thomas More, and Maria Montessori. After her are Plutarch, Michel de Montaigne, Origen, Al-Farabi, Ludwig Wittgenstein, and John Amos Comenius.

Others Deceased in 496 BC