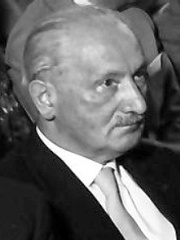 Martin Heidegger (; German: [ˈmaʁtiːn ˈhaɪdɛɡɐ]; 26 September 1889 – 26 May 1976) was a German philosopher, and a seminal thinker in the Continental tradition of philosophy. He is best known for contributions to phenomenology, hermeneutics, and existentialism. In Being and Time (1927), Heidegger addresses the meaning of "being" by considering the question, "what is common to all entities that makes them entities?" Heidegger approaches this question through an analysis of Dasein, his term for the specific type of being that humans possess, and which he associates closely with his concept of "being-in-the-world" (In-der-Welt-sein). Read more on Wikipedia

Among philosophers, Martin Heidegger ranks 33 out of 1,089. Before him are Friedrich Engels, Averroes, Democritus, Diogenes, David Hume, and Laozi. After him are Søren Kierkegaard, Auguste Comte, Sun Tzu, Plutarch, Al-Ghazali, and Michel de Montaigne.