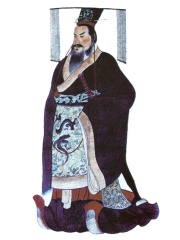 Qin Shi Huang (Chinese: 秦始皇; lit. 'First Emperor of Qin', pronunciation ; 259–210 BCE), or Shihuangdi, was the founder of the Qin dynasty, and first emperor of a unified China. Rather than maintain the title of "king" (王 wáng) borne by the previous Shang and Zhou rulers, he ruled as the First Emperor (始皇帝) of the Qin dynasty from 221 to 210 BCE. His self-invented title "emperor" (皇帝 huángdì) would continue to be borne by Chinese rulers for the next two millennia. Read more on Wikipedia

Qin Shi Huang is most famous for being the first emperor of China and unifying the country.

Among politicians, Qin Shi Huang ranks 39 out of 15,710. Before him are Louis XVI of France, Justinian I, Marcus Aurelius, Charles V, Holy Roman Emperor, Pericles, and Huang Xianfan. After him are David, Richard III of England, Maria Theresa, Martin Van Buren, Peter the Great, and John F. Kennedy.

Others Deceased in 210 BC