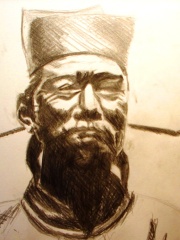 Shen Kuo (Chinese: 沈括; 1031–1095) or Shen Gua, courtesy name Cunzhong (存中) and pseudonym Mengqi (now usually given as Mengxi) Weng (夢溪翁), was a Chinese polymathic scientist and statesman of the Song dynasty (960–1279). Shen was a master in many fields of study including mathematics, optics, and horology. In his career as a civil servant, he became a finance minister, governmental state inspector, head official for the Bureau of Astronomy in the Song court, Assistant Minister of Imperial Hospitality, and also served as an academic chancellor. Read more on Wikipedia

Shen kuo is most famous for its temples and temples.

Among philosophers, Shen Kuo ranks 238 out of 1,081. Before him are Pelagius, Benjamin Constant, Michael Psellos, Al-Jahiz, Josef Breuer, and Iamblichus. After him are Judah Loew ben Bezalel, Epimenides, Nikolai Berdyaev, Guy Debord, François Fénelon, and Apollodorus of Athens.

Among people born in 1031, Shen Kuo ranks 2. Before him is Roger I of Sicily. After him are Matilda of Flanders, Malcolm III of Scotland, Spytihněv II, Duke of Bohemia, and Robert, Count of Mortain. Among people deceased in 1095, Shen Kuo ranks 2. Before him is Ladislaus I of Hungary. After him are Tutush I, Olaf I of Denmark, Al-Mu'tamid ibn Abbad, Leopold II, Margrave of Austria, Haakon Magnusson of Norway, Constantine Doukas, Nikephoros Bryennios the Elder, Ruben I, Prince of Armenia, and Sophia of Hungary.