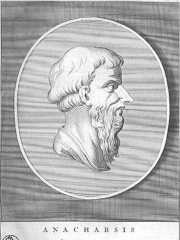 Anacharsis (; Ancient Greek: Ἀνάχαρσις) was a Scythian philosopher; he travelled from his homeland on the northern shores of the Black Sea, to Ancient Athens, in the early 6th century BC, and made a great impression as a forthright and outspoken barbarian, that is, a non-Greek speaker. He very well could have been a forerunner of the Cynics, in part because of his strong, but playful, parrhesia. Read more on Wikipedia

Anacharsis was a Scythian philosopher who traveled to Greece and introduced many Greek customs and ideas to the Scythians.

Page views of Anacharses by language

Among philosophers, Anacharsis ranks 285 out of 1,081. Before him are Houston Stewart Chamberlain, Priscus, Bruno Bauer, Panaetius, Rudolf Bultmann, and Arnaldus de Villa Nova. After him are A. S. Neill, Nicolai Hartmann, Félix Guattari, Roscellinus, Ramana Maharshi, and Adam of Bremen.

Among people born in 700 BC, Anacharsis ranks 9. Before him are Cyaxares, Arion, Psamtik I, Jeconiah, Tyrtaeus, and Amasis II. After him are Phalaris, Periander, Psamtik II, Necho I, Cylon of Athens, and Perdiccas I of Macedon. Among people deceased in 600 BC, Anacharsis ranks 11. Before him are Belshazzar, Habakkuk, Astyages, Maya, Epimenides, and Theano. After him are Phalaris, Ibycus, Cleisthenes of Sicyon, Sushruta, Mimnermus, and Harpagus.

Among PHILOSOPHERS In Ukraine