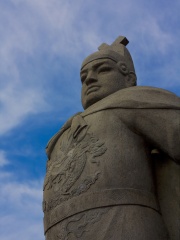 Zheng He (simplified Chinese: 郑和; traditional Chinese: 鄭和; pinyin: Zhènghé; Wade–Giles: Chêng-ho; 1371–1433 or 1435) was a Chinese mariner, explorer, diplomat, fleet admiral, and court eunuch during China's early Ming dynasty. He was originally born as Ma He in a Muslim family and later adopted the surname Zheng conferred by the Yongle Emperor. Commissioned by the Yongle Emperor and later the Xuande Emperor, Zheng commanded seven expeditionary treasure voyages to Southeast Asia, South Asia, West Asia, and East Africa from 1405 to 1433. Read more on Wikipedia

Zheng He is most famous for his voyages to Southeast Asia, South Asia, and East Africa in the 15th century.

Among explorers, Zheng He ranks 11 out of 405. Before him are Amerigo Vespucci, Bartolomeu Dias, Roald Amundsen, Ibn Battuta, James Cook, and Hernán Cortés. After him are Francis Drake, Francisco Pizarro, Abel Tasman, David Livingstone, Prince Henry the Navigator, and Fridtjof Nansen.

Among EXPLORERS In China