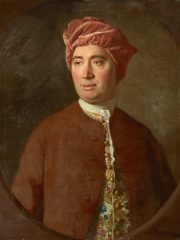 David Hume (; born David Home; 7 May 1711 NS (26 April 1711 OS) – 25 August 1776) was a Scottish Enlightenment philosopher, historian, economist, librarian and essayist, who is best known today for his highly influential system of philosophical empiricism, scepticism, and naturalism. Beginning with A Treatise of Human Nature (1739–40), Hume strove to create a naturalistic science of man that examined the psychological basis of human nature. Hume argued against the existence of innate ideas, positing that all human knowledge derives solely from experience. Read more on Wikipedia

David Hume is most famous for his skepticism and empiricism.

Among philosophers, David Hume ranks 37 out of 1,081. Before him are Baruch Spinoza, Martin Heidegger, Anaximander, Al-Ghazali, Diogenes, and Laozi. After him are Søren Kierkegaard, Protagoras, Thomas More, Maria Montessori, Sun Tzu, and Plutarch.