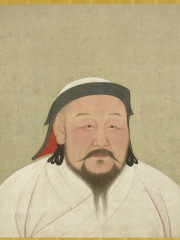 Kublai (; Mongolian: Хубилай, romanized: Hubilai; Chinese: 忽必烈; pinyin: Hūbìliè; 23 September  1215 – 18 February 1294), also known as the Emperor Shizu of Yuan, was the fifth khagan-emperor of the Mongol Empire (Ikh Mongol Uls), reigning from 1260 to 1294 (although after the division of the empire this was a nominal position). He also founded the Yuan dynasty in China as a conquest dynasty in 1271, and ruled as the first Yuan emperor until his death in 1294. Kublai was the fourth son of Tolui (his second son with Sorghaghtani Beki) and a grandson of Genghis Khan. Read more on Wikipedia

Kublai Khan is most famous for being the emperor of China and Mongolia from 1260 to 1294. He was the grandson of Genghis Khan, founder of the Mongol Empire.

Among politicians, Kublai Khan ranks 141 out of 15,710. Before him are Maximilian I, Holy Roman Emperor, Deng Xiaoping, Sun Yat-sen, Simón Bolívar, Richard Nixon, and Bayezid I. After him are Darius III, Paul von Hindenburg, Bayezid II, Hosni Mubarak, Abdul Hamid II, and Louis the Pious.

Among people born in 1215, Kublai Khan ranks 1. After him are Pope Celestine V, Pope John XXI, Pope Nicholas III, Violant of Hungary, Otto III, Margrave of Brandenburg, William of Moerbeke, Hethum I, King of Armenia, Mécia Lopes de Haro, John I of Trebizond, Beatrice d'Este, Queen of Hungary, and Zdislava Berka. Among people deceased in 1294, Kublai Khan ranks 1. After him are Brunetto Latini, Louis II, Duke of Bavaria, John I, Duke of Brabant, Rabban Bar Sauma, and Dmitry of Pereslavl.