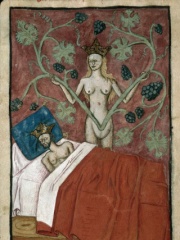 Astyages (Median: R̥štivaigah; Babylonian: Ištumegu; spelled by Herodotus as Ἀστυάγης Astyágēs, by Ctesias as Ἀστυΐγας Astyḯgas, by Diodorus as Ἀσπάδας Aspádas) was the last king of the Median Empire, r. 585–550 BC, the son of Cyaxares; he was dethroned in 550 BCE by Cyrus the Great. His name derives from the Old Iranian R̥štivaiga, which means "swinging the spear, lance-hurler". Read more on Wikipedia

Atyages is most famous for being the king of the Medes and the father of Cyrus the Great.

Page views of Astyages by language

Among politicians, Astyages ranks 991 out of 15,710. Before him are Alexander Van der Bellen, Emperor Xuanzong of Tang, Sukjong of Joseon, William Jennings Bryan, Tedros Adhanom, and Fernando Álvarez de Toledo, 3rd Duke of Alba. After him are Harold Godwinson, Constantine IV, Margaret Theresa of Spain, Scorpion II, Jorge Rafael Videla, and Robert I, Duke of Normandy.

Among people born in 700 BC, Astyages ranks 2. Before him is Lucius Tarquinius Priscus. After him are Psamtik I, Jeconiah, Arion, Cyaxares, Tyrtaeus, Amasis II, Periander, Phalaris, Psamtik II, and Anacharsis. Among people deceased in 600 BC, Astyages ranks 6. Before him are Laozi, Daniel, Draco, Tomyris, and Belshazzar. After him are Maya, Epimenides, Phalaris, Theano, Anacharsis, and Ibycus.