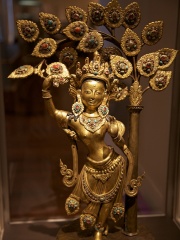 Queen Māyā of Sakya (Pali: Māyādevī) was the birth mother of Gautama Buddha, the sage on whose teachings Buddhism was founded. She was sister of Mahāpajāpatī Gotamī, the first Buddhist nun ordained by the Buddha.In Buddhist tradition Maya died soon after the birth of Buddha, generally said to be seven days afterwards, and came to life again in a Hindu-Buddhist heaven, a pattern that is said to be followed in the births of all Buddhas. Thus Maya did not raise her son who was instead raised by his maternal aunt Mahapajapati Gotami. Read more on Wikipedia

Since 2007, the English Wikipedia page of Maya has received more than 554,253 page views. Her biography is available in 38 different languages on Wikipedia (up from 37 in 2019). Maya is the 398th most popular religious figure (up from 422nd in 2019), the 3rd most popular biography from Nepal (down from 2nd in 2019) and the most popular Nepalese Religious Figure.

Maya is most famous for being the Hindu goddess of illusion.

Page views of Mayas by language

Among people born in 600 BC, Maya ranks 14. Before her are Tomyris, Belshazzar, Cambyses I, Polycrates, Alexander I of Macedon, and Lucius Junius Brutus. After her are Pheidippides, Mardonius, Hippasus, Chilon of Sparta, Thespis, and Hippias. Among people deceased in 600 BC, Maya ranks 7. Before her are Laozi, Daniel, Draco, Tomyris, Belshazzar, and Astyages. After her are Epimenides, Phalaris, Theano, Anacharsis, Ibycus, and Cleisthenes of Sicyon.

Among RELIGIOUS FIGURES In Nepal