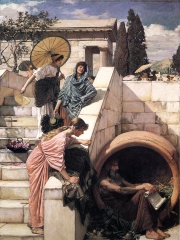 Diogenes ( dy-OJ-in-eez; Ancient Greek: Διογένης, romanized: Diogénēs [di.oɡénɛːs]), also known as Diogenes the Cynic (Διογένης ὁ Κυνικός, Diogénēs ho Kynikós) or Diogenes of Sinope, was a Greek philosopher and one of the founders of Cynicism (philosophy). He was born in Sinope, an Ionian colony on the Black Sea coast of Anatolia (Asia Minor) in 412 or 404 BC and died at Corinth in 323 BC.Diogenes was a controversial figure. He was allegedly banished, or fled from, Sinope for debasement of currency. Read more on Wikipedia

Diogenes was a philosopher who lived in the 4th century BC. He is most famous for his search for an honest man.

Page views of Diogenes by language

Among philosophers, Diogenes ranks 35 out of 1,081. Before him are Heraclitus, Parmenides, Baruch Spinoza, Martin Heidegger, Anaximander, and Al-Ghazali. After him are Laozi, David Hume, Søren Kierkegaard, Protagoras, Thomas More, and Maria Montessori.