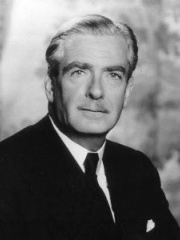 Robert Anthony Eden, 1st Earl of Avon, (12 June 1897 – 14 January 1977) was a British Conservative Party politician who served as Prime Minister of the United Kingdom from 1955 until his resignation in 1957. Achieving rapid promotion as a young Conservative member of Parliament, he became foreign secretary aged 38, before resigning in protest at Neville Chamberlain's appeasement policy towards Mussolini's Fascist regime in Italy. He again held that position for most of the Second World War, and a third time in the early 1950s. Read more on Wikipedia

Among politicians, Anthony Eden ranks 537 out of 15,577. Before him are Frederick I of Prussia, Louis the German, John Hunyadi, Alexander IV of Macedon, Sonia Gandhi, and Sergio Mattarella. After him are Theodosius II, Rehoboam, Franz von Papen, Ahmose I, Emperor Wu of Han, and Gideon.