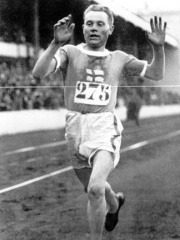 Paavo Johannes Nurmi (Finnish pronunciation: [ˈpɑːʋo ˈnurmi] (listen); 13 June 1897 – 2 October 1973) was a Finnish middle-distance and long-distance runner. He was called the "Flying Finn" or the "Phantom Finn", as he dominated distance running in the early 20th century. Nurmi set 22 official world records at distances between 1500 metres and 20 kilometres, and won nine gold and three silver medals in his twelve events in the Summer Olympic Games. Read more on Wikipedia

Since 2007, the English Wikipedia page of Paavo Nurmi has received more than 688,912 page views. His biography is available in 61 different languages on Wikipedia (up from 58 in 2019). Paavo Nurmi is the 3rd most popular athlete (down from 2nd in 2019), the 6th most popular biography from Finland and the most popular Finnish Athlete.

Paavo Nurmi was a Finnish runner who was most famous for his achievements in the 1920s and 1930s. He won nine Olympic gold medals and set 22 official world records in distances ranging from 1500 meters to 20 kilometers.

Among ATHLETES In Finland