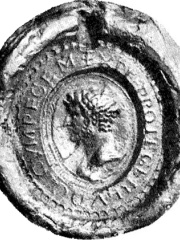 Louis the German (c. 806/810 – 28 August 876), also known as Louis II, was the first king of East Francia, and ruled from 843–876 AD. Grandson of emperor Charlemagne and the third son of Louis the Pious, emperor of Francia, and his first wife, Ermengarde of Hesbaye, he received the appellation Germanicus shortly after his death in recognition of Magna Germania of the Roman Empire, reflecting the Carolingians' assertions that they were the rightful descendants of the Roman Empire. After protracted clashes with his father and his brothers, Louis received the East Frankish kingdom in the 843 Treaty of Verdun. Read more on Wikipedia

Since 2007, the English Wikipedia page of Louis the German has received more than 398,729 page views. His biography is available in 50 different languages on Wikipedia making him the 397th most popular politician.

Page views of Louis the Germen by language

Among politicians, Louis the German ranks 393 out of 14,801. Before him are Lucius Verus, Smenkhkare, Priam, Charles the Fat, Vitellius, and Baldwin IV of Jerusalem. After him are John Adams, Numa Pompilius, Mithridates VI of Pontus, Murad V, Menkaure, and Abbas the Great.