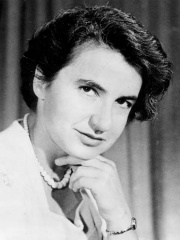 Rosalind Elsie Franklin (25 July 1920 – 16 April 1958) was a British chemist and X-ray crystallographer whose work was central to the understanding of the molecular structures of DNA (deoxyribonucleic acid), RNA (ribonucleic acid), viruses, coal, and graphite. Although her works on coal and viruses were appreciated in her lifetime, Franklin’s contributions to the discovery of the structure of DNA were largely unrecognized during her life, for which she has been variously referred to as the "wronged heroine", the "dark lady of DNA", the "forgotten heroine", a "feminist icon", and the "Sylvia Plath of molecular biology".Franklin graduated in 1941 with a degree in natural sciences from Newnham College, Cambridge, and then enrolled for a PhD in physical chemistry under Ronald George Wreyford Norrish, the 1920 Chair of Physical Chemistry at the University of Cambridge. Disappointed by Norrish's lack of enthusiasm, she took up a research position under the British Coal Utilisation Research Association (BCURA) in 1942. Read more on Wikipedia