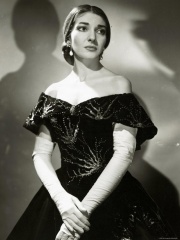 Maria Callas (born Sophie Cecilia Kalos; December 2, 1923 – September 16, 1977) was an American-born Greek soprano who was one of the most renowned and influential opera singers of the 20th century. Many critics praised her bel canto technique, wide-ranging voice and dramatic interpretations. Her repertoire ranged from classical opera seria to the bel canto operas of Donizetti, Bellini and Rossini and, further, to the works of Verdi and Puccini; and, in her early career, to the music dramas of Wagner. Read more on Wikipedia

Maria Callas was a Greek-American opera singer who is most famous for her bel canto technique.

Among singers, Maria Callas ranks 6 out of 3,541. Before her are Elvis Presley, Édith Piaf, Cher, Luciano Pavarotti, and Janis Joplin. After her are Frank Sinatra, Johnny Cash, Tina Turner, Anni-Frid Lyngstad, Joan Baez, and Charles Aznavour.