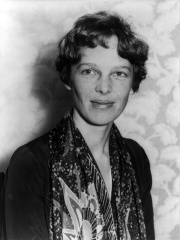 Amelia Mary Earhart ( AIR-hart, born July 24, 1897; disappeared July 2, 1937; declared dead January 5, 1939) was an American aviation pioneer and writer. Earhart was the first female aviator to fly solo across the Atlantic Ocean. She set many other records, was one of the first aviators to promote commercial air travel, wrote best-selling books about her flying experiences, and was instrumental in the formation of The Ninety-Nines, an organization for female pilots.Born and raised in Atchison, Kansas, and later in Des Moines, Iowa, Earhart developed a passion for adventure at a young age, steadily gaining flying experience from her twenties. Read more on Wikipedia

Amelia Earhart was an American aviator who set many aviation records and became the first woman to fly solo across the Atlantic Ocean.

Most Popular Pilots in Wikipedia

Among PILOTS In United States