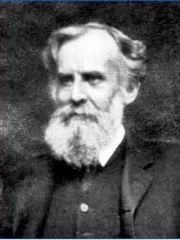 John Venn, FRS, FSA (4 August 1834 – 4 April 1923) was an English mathematician, logician and philosopher noted for introducing Venn diagrams, which are used in logic, set theory, probability, statistics, and computer science. In 1866, Venn published The Logic of Chance, a ground-breaking book which espoused the frequency theory of probability, arguing that probability should be determined by how often something is forecast to occur as opposed to "educated" assumptions. Read more on Wikipedia

John Venn is most famous for his diagrams of logical relationships between sets, which are called Venn diagrams.

Among philosophers, John Venn ranks 116 out of 1,081. Before him are Philo, Eusebius, Pyrrho, Meister Eckhart, Charles Fourier, and Gilles Deleuze. After him are Bodhidharma, Al-Tabari, George Gurdjieff, Emil Cioran, Johann Friedrich Herbart, and Antisthenes.