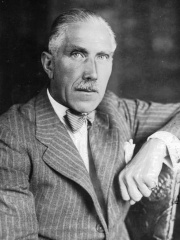 Franz Joseph Hermann Michael Maria von Papen, Erbsälzer zu Werl und Neuwerk (German: [ˈfʁants fɔn ˈpaːpn̩] (listen); 29 October 1879 – 2 May 1969) was a German conservative politician, diplomat, Prussian nobleman and General Staff officer. He served as the chancellor of Germany in 1932, and then as the vice-chancellor under Adolf Hitler from 1933 to 1934. Born into a wealthy family of Westphalian Catholic aristocrats, Papen served in the Prussian Army from 1898 onward and was trained as a German General Staff officer. Read more on Wikipedia

Franz von Papen was a German politician who served as Chancellor of Germany from 1932 to 1933. He was appointed by President Paul von Hindenburg in order to appease Adolf Hitler and the Nazis.

Among politicians, Franz von Papen ranks 540 out of 15,577. Before him are Alexander IV of Macedon, Sonia Gandhi, Sergio Mattarella, Anthony Eden, Theodosius II, and Rehoboam. After him are Ahmose I, Emperor Wu of Han, Gideon, Philip III of France, Nizam al-Mulk, and Abdülaziz.