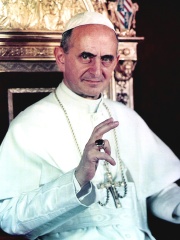 Pope Paul VI (Latin: Paulus VI; Italian: Paolo VI; born Giovanni Battista Enrico Antonio Maria Montini, Italian: [dʒoˈvanni batˈtista enˈriːko anˈtɔːnjo maˈriːa monˈtiːni]; 26 September 1897 – 6 August 1978) was head of the Catholic Church and sovereign of the Vatican City State from 21 June 1963 to his death in 1978. Succeeding John XXIII, he continued the Second Vatican Council, which he closed in 1965, implementing its numerous reforms. He fostered improved ecumenical relations with Eastern Orthodox and Protestant churches, which resulted in many historic meetings and agreements.Montini served in the Holy See's Secretariat of State from 1922 to 1954. While in the Secretariat of State, Montini and Domenico Tardini were considered to be the closest and most influential advisors of Pope Pius XII. Read more on Wikipedia

Pope Paul VI was most famous for his encyclical Humanae Vitae, which dealt with the issue of birth control.