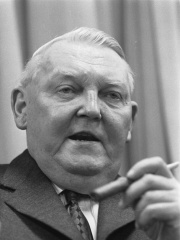 Ludwig Wilhelm Erhard (German: [ˈluːtvɪç ˈʔeːɐ̯haʁt]; 4 February 1897 – 5 May 1977) was a German politician affiliated with the Christian Democratic Union (CDU), and chancellor of West Germany from 1963 until 1966. He is known for leading the West German postwar economic reforms and economic recovery (Wirtschaftswunder, German for "economic miracle") in his role as Minister of Economic Affairs under Chancellor Konrad Adenauer from 1949 to 1963. During that period he promoted the concept of the social market economy (soziale Marktwirtschaft), on which Germany's economic policy in the 21st century continues to be based. Read more on Wikipedia

Ludwig Erhard was the West German Minister of Economics from 1949 to 1963. He is most famous for his economic policies, which were known as the "social market economy."

Among BUSINESSPEOPLE In Germany