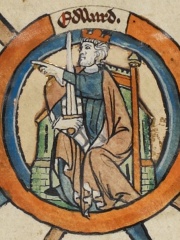 Edward the Elder (c. 874 – 17 July 924) was King of the Anglo-Saxons from 899 until his death in 924. He was the elder son of Alfred the Great and his wife Ealhswith. When Edward succeeded to the throne, he had to defeat a challenge from his cousin Æthelwold, who had a strong claim to the throne as the son of Alfred's elder brother and predecessor, Æthelred I. Alfred had succeeded Æthelred as king of Wessex in 871, and almost faced defeat against the Danish Vikings until his decisive victory at the Battle of Edington in 878. Read more on Wikipedia

Edward the Elder was king of the Anglo-Saxons from 899 to 924. He was born in 869 and died in 924. Edward was the son of Alfred the Great. Edward is most famous for uniting the Anglo-Saxon kingdoms of Wessex, Mercia, East Anglia, Kent, and Northumbria.

Page views of Edward the Elders by language

Among politicians, Edward the Elder ranks 656 out of 15,577. Before him are Michael I of Romania, Suharto, Kliment Voroshilov, Tiberius Gracchus, Daniel Ortega, and Benjamin Netanyahu. After him are Archduchess Gisela of Austria, Charles IV of Spain, Leo III the Isaurian, Georgi Dimitrov, Andromache, and Abu Sufyan ibn Harb.