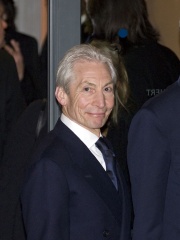 Charles Robert Watts (2 June 1941 – 24 August 2021) was an English musician who achieved international fame as the drummer of the Rolling Stones from 1963 until his death in 2021. Originally trained as a graphic artist, Watts developed an interest in jazz at a young age and joined the band Blues Incorporated. He also started playing drums in London's rhythm and blues clubs, where he met future bandmates Mick Jagger, Keith Richards and Brian Jones. Read more on Wikipedia

Charlie Watts is most famous for being the drummer of the Rolling Stones.

Among musicians, Charlie Watts ranks 20 out of 2,662. Before him are Leopold Mozart, Madonna, Arcangelo Corelli, Ray Charles, Brian May, and Jean-Michel Jarre. After him are George Harrison, Władysław Szpilman, Ringo Starr, Arthur Rubinstein, Mark Knopfler, and Eric Clapton.