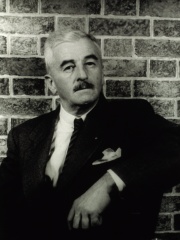 William Cuthbert Faulkner (; September 25, 1897 – July 6, 1962) was an American writer and Nobel Prize laureate from Oxford, Mississippi. Faulkner wrote novels, short stories, screenplays, poetry, essays, and a play. He is primarily known for his novels and short stories set in the fictional Yoknapatawpha County, based on Lafayette County, Mississippi, where he spent most of his life.Faulkner is one of the most celebrated writers in American literature generally and Southern literature specifically. Read more on Wikipedia

Since 2007, the English Wikipedia page of William Faulkner has received more than 3,807,959 page views. His biography is available in 99 different languages on Wikipedia making him the 145th most popular writer.

Among writers, William Faulkner ranks 143 out of 4,883. Before him are Ismail I, H. P. Lovecraft, Sigrid Undset, H. G. Wells, Heinrich Böll, and Sully Prudhomme. After him are Haruki Murakami, Georges Simenon, Novalis, Elias Canetti, Petronius, and Charlotte Brontë.