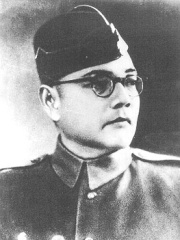 Subhas Chandra Bose ( (listen) shuub-HAHSS CHUN-drə BOHSS; 23 January 1897 – 18 August 1945) was an Indian nationalist whose defiance of British authority in India made him a hero among many Indians, but his wartime alliances with Nazi Germany and Imperial Japan left a legacy vexed by authoritarianism, anti-Semitism, and military failure. The honorific Netaji (Hindi: "Respected Leader") was first applied to Bose in Germany in early 1942—by the Indian soldiers of the Indische Legion and by the German and Indian officials in the Special Bureau for India in Berlin. It is now used throughout India.Subhas Bose was born into wealth and privilege in a large Bengali family in Orissa during the British Raj. Read more on Wikipedia

Subhas Chandra Bose was an Indian nationalist who sought to overthrow British colonial rule in India. He organized the Indian National Army and led it against the British in the Second World War.

Among politicians, Subhas Chandra Bose ranks 671 out of 15,577. Before him are Abd al-Rahman I, James Madison, Alexis of Russia, Constantius Chlorus, Sukjong of Joseon, and Gaius Cassius Longinus. After him are Sasaki Kojirō, Hezekiah, Abd al-Rahman III, Ladislaus the Posthumous, Olaf Scholz, and Aldo Moro.