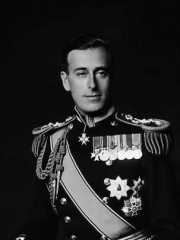 Louis Francis Albert Victor Nicholas Mountbatten, 1st Earl Mountbatten of Burma (25 June 1900 – 27 August 1979) was a British naval officer, colonial administrator and close relative of the British royal family. Mountbatten, who was of German descent, was born in the United Kingdom to the prominent Battenberg family and was a maternal uncle of Prince Philip, Duke of Edinburgh, and a second cousin of King George VI. He joined the Royal Navy during the First World War and was appointed Supreme Allied Commander, South East Asia Command, in the Second World War. Read more on Wikipedia

Mountbatten was a British naval officer and statesman, an uncle of Prince Philip, Duke of Edinburgh, and second cousin once removed of Queen Elizabeth II. He served as First Sea Lord of the Royal Navy from 1954 to 1959 and Chief of the Defence Staff from 1959 to 1965.

Among politicians, Louis Mountbatten, 1st Earl Mountbatten of Burma ranks 696 out of 15,577. Before him are Robert Gascoyne-Cecil, 3rd Marquess of Salisbury, Louis the Stammerer, Albert I of Belgium, Yuan Shikai, Enver Pasha, and Edvard Beneš. After him are Enrico Dandolo, Childeric III, Henry I of England, Henry VI, Holy Roman Emperor, Maximinus Thrax, and Ilse Koch.