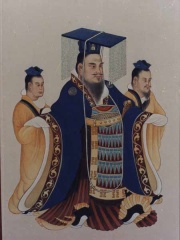 Emperor Wu of Han (156 – 29 March 87 BC), formally enshrined as Emperor Wu the Filial (Chinese: 孝武皇帝), born Liu Che (劉徹) and courtesy name Tong (通), was the seventh emperor of the Han dynasty of ancient China, ruling from 141 to 87 BC. His reign lasted 54 years – a record not broken until the reign of the Kangxi Emperor more than 1,800 years later and remains the record for ethnic Chinese emperors. His reign resulted in a vast expansion of geopolitical influence for the Chinese civilization, and the development of a strong centralized state via governmental policies, economical reorganization and promotion of a hybrid Legalist–Confucian doctrine. In the field of historical social and cultural studies, Emperor Wu is known for his religious innovations and patronage of the poetic and musical arts, including development of the Imperial Music Bureau into a prestigious entity. Read more on Wikipedia

Page views of Emperor Wu of Hans by language

Among politicians, Emperor Wu of Han ranks 542 out of 15,577. Before him are Sergio Mattarella, Anthony Eden, Theodosius II, Rehoboam, Franz von Papen, and Ahmose I. After him are Gideon, Philip III of France, Nizam al-Mulk, Abdülaziz, Patrice Lumumba, and John, King of England.

Others Deceased in 87 BC