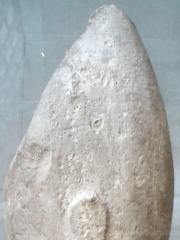 Ahmose I (Ancient Egyptian: jꜥḥ ms(j .w), reconstructed /ʔaʕaħ'maːsjə/ (MK), Egyptological pronunciation Ahmose, sometimes written as Amosis or Aahmes, meaning "Iah (the Moon) is born") was a pharaoh and founder of the Eighteenth Dynasty of Egypt, classified as the first dynasty of the New Kingdom of Egypt, the era in which ancient Egypt achieved the peak of its power. He was a member of the Theban royal house, the son of pharaoh Seqenenre Tao and brother of the last pharaoh of the Seventeenth dynasty, Kamose. During the reign of his father or grandfather, Thebes rebelled against the Hyksos, the rulers of Lower Egypt. Read more on Wikipedia

Ahmose I was the first pharaoh of the 18th dynasty, and is most famous for reuniting Egypt after a period of civil war.

Page views of Ahmose IS by language

Among politicians, Ahmose I ranks 541 out of 15,577. Before him are Sonia Gandhi, Sergio Mattarella, Anthony Eden, Theodosius II, Rehoboam, and Franz von Papen. After him are Emperor Wu of Han, Gideon, Philip III of France, Nizam al-Mulk, Abdülaziz, and Patrice Lumumba.