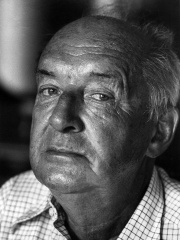 Vladimir Vladimirovich Nabokov (Russian: Владимир Владимирович Набоков [vlɐˈdʲimʲɪr vlɐˈdʲimʲɪrəvʲɪtɕ nɐˈbokəf] (listen); 22 April [O.S. 10 April] 1899 – 2 July 1977), also known by the pen name Vladimir Sirin (Владимир Сирин), was a Russian-American novelist, poet, translator, and entomologist. Born in Russia, he wrote his first nine novels in Russian (1926–1938) while living in Berlin, where he met his wife. He achieved international acclaim and prominence after moving to the United States and beginning to write in English. Read more on Wikipedia

Vladimir Nabokov is most famous for his novel Lolita, which tells the story of a middle-aged man's sexual obsession with a 12-year-old girl.

Among writers, Vladimir Nabokov ranks 111 out of 5,755. Before him are Cato the Elder, Anatole France, Boris Pasternak, Du Fu, François Rabelais, and Samuel Beckett. After him are Federico García Lorca, Mary Shelley, François Villon, Plautus, Václav Havel, and Sully Prudhomme.