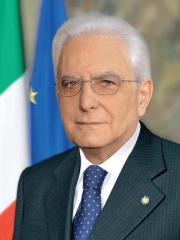 Sergio Mattarella (Italian pronunciation: [ˈsɛrdʒo mattaˈrɛlla]; born 23 July 1941) is an Italian politician, jurist, academic and lawyer who has served as the president of Italy since 2015. A Christian leftist politician, Mattarella was a leading member of the Christian Democracy party from the early 1980s until its dissolution. He served as Minister for Parliamentary Relations from 1987 to 1989, and Minister of Education from 1989 to 1990. Read more on Wikipedia

Sergio Mattarella is the current president of Italy. He was elected in February 2015 and is the 12th president of the Italian Republic.

Among politicians, Sergio Mattarella ranks 536 out of 15,577. Before him are Lavrentiy Beria, Frederick I of Prussia, Louis the German, John Hunyadi, Alexander IV of Macedon, and Sonia Gandhi. After him are Anthony Eden, Theodosius II, Rehoboam, Franz von Papen, Ahmose I, and Emperor Wu of Han.