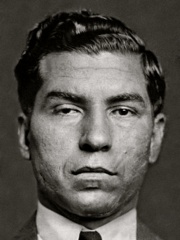 Charles "Lucky" Luciano (, Italian: [luˈtʃaːno]; born Salvatore Lucania [salvaˈtoːre lukaˈniːa]; November 24, 1897 – January 26, 1962) was an Italian-born gangster who operated mainly in the United States. Luciano started his criminal career in the Five Points gang and was instrumental in the development of the National Crime Syndicate. Luciano is considered the father of modern organized crime in the United States for the establishment of The Commission in 1931, after he abolished the boss of bosses title held by Salvatore Maranzano following the Castellammarese War. Read more on Wikipedia

Lucky Luciano is most famous for being the first boss of the Genovese crime family.

Among mafiosos, Lucky Luciano ranks 4 out of 52. Before him are Pablo Escobar, Al Capone, and Billy the Kid. After him are John Dillinger, Jesse James, Salvatore Riina, Jack Ruby, Frank Abagnale, Bernie Madoff, Jeffrey Epstein, and Meyer Lansky.