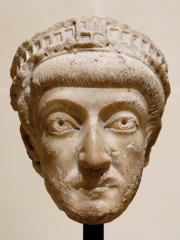 Theodosius II (Latin: Flavius Theodosius Junior Augustus; Greek: Θεοδόσιος Βʹ; 10 April 401 – 28 July 450), commonly surnamed Theodosius the Younger, or Theodosius the Calligrapher, was the Eastern Roman Emperor for most of his life, taking the throne as an infant in 402 and ruling as the Eastern Empire's sole emperor after the death of his father Arcadius in 408. His reign was marked by the promulgation of the Theodosian law code and the construction of the Theodosian Walls of Constantinople. Read more on Wikipedia

Since 2007, the English Wikipedia page of Theodosius II has received more than 483,519 page views. His biography is available in 61 different languages on Wikipedia making him the 411th most popular politician.

Among politicians, Theodosius II ranks 407 out of 14,801. Before him are Philip I of Castile, Severus Alexander, Edward I of England, Frederick III, Holy Roman Emperor, Charles IV of France, and Neville Chamberlain. After him are Henry the Fowler, Louis X of France, Musa I of Mali, Imre Nagy, Şehzade Bayezid, and Yongle Emperor.