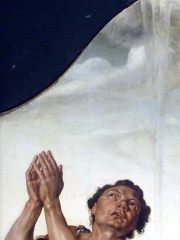 Gideon (; Hebrew: גִּדְעוֹן‎, Modern: Gīdʿōn, Tiberian: Gīḏəʿōn) also named Jerubbaal and Jerubbesheth, was a military leader, judge and prophet whose calling and victory over the Midianites are recounted in Judges 6–8 of the Book of Judges in the Hebrew Bible. Gideon was the son of Joash, from the Abiezrite clan in the tribe of Manasseh and lived in Ephra (Ophrah). Read more on Wikipedia

Gideon is most famous for his victory in the case of Gideon v. Wainwright, which established the requirement for indigent criminal defendants to be provided with attorneys.

Page views of Gideons by language

Among politicians, Gideon ranks 543 out of 15,577. Before him are Anthony Eden, Theodosius II, Rehoboam, Franz von Papen, Ahmose I, and Emperor Wu of Han. After him are Philip III of France, Nizam al-Mulk, Abdülaziz, Patrice Lumumba, John, King of England, and Mahmoud Abbas.