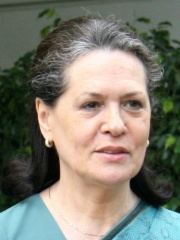 Sonia Gandhi (née Maino; born 9 December 1946) is an Indian politician. She is the longest serving president of the Indian National Congress, a social democratic political party, which has governed India for most of its post-independence history. She took over as the party leader in 1998, seven years after the assassination of Rajiv Gandhi, her husband and a former Prime Minister of India, and remained in office until 2017 after serving for twenty-two years. Read more on Wikipedia

Among politicians, Sonia Gandhi ranks 535 out of 15,577. Before her are William IV of the United Kingdom, Lavrentiy Beria, Frederick I of Prussia, Louis the German, John Hunyadi, and Alexander IV of Macedon. After her are Sergio Mattarella, Anthony Eden, Theodosius II, Rehoboam, Franz von Papen, and Ahmose I.