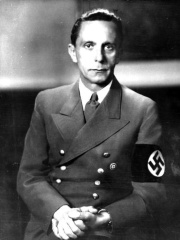 Paul Joseph Goebbels (pronounced [ˈpaʊ̯l ˈjoːzɛf ˈɡœbl̩s] (listen); 29 October 1897 – 1 May 1945) was a German Nazi politician who was the Gauleiter (district leader) of Berlin, chief propagandist for the Nazi Party, and then Reich Minister of Propaganda from 1933 to 1945. He was one of Adolf Hitler's closest and most devoted acolytes, known for his skills in public speaking and his deeply virulent antisemitism, which was evident in his publicly voiced views. Read more on Wikipedia

Joseph Goebbels was a German politician and Nazi propagandist. He was one of Adolf Hitler's closest associates and most devoted followers, and he was a leading member of the Nazi Party. As a member of Hitler's inner circle, he was a powerful figure in the Nazi regime.

Among politicians, Joseph Goebbels ranks 152 out of 15,710. Before him are Abdul Hamid II, Louis the Pious, Francis I of France, Augusto Pinochet, Murad I, and Caracalla. After him are Oliver Cromwell, Pol Pot, Henry III of France, Ho Chi Minh, Demosthenes, and Batu Khan.