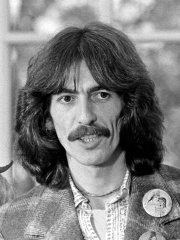 George Harrison (25 February 1943 – 29 November 2001) was an English musician and singer-songwriter who achieved international fame as the lead guitarist of the Beatles. Sometimes called "the quiet Beatle", Harrison embraced Indian culture and helped broaden the scope of popular music through his incorporation of Indian instrumentation and Hindu-aligned spirituality in the Beatles' work. Although the majority of the band's songs were written by John Lennon and Paul McCartney, most Beatles albums from 1965 onwards contained at least two Harrison compositions. Read more on Wikipedia

George Harrison is most famous for being a member of the Beatles, as well as being a solo artist.

Among musicians, George Harrison ranks 21 out of 2,662. Before him are Madonna, Arcangelo Corelli, Ray Charles, Brian May, Jean-Michel Jarre, and Charlie Watts. After him are Władysław Szpilman, Ringo Starr, Arthur Rubinstein, Mark Knopfler, Eric Clapton, and Keith Richards.